It can be said that most of the terrestrial mammals live in the alpine mountains in the center of Japan’s main island.

Also, small mammals such as the shrew, a special species existing in the Alpine Belt, live in the mountains of the Japan Alps.

These mammals live from the base of the Alps to the Sub Alpine Belt.  Some migrate from lowland to highland in the summer and others such as the Hondo Okojo (Mustela erminea nippon) stay in the high land even in the winter.  They are likely remaining from the glacial age.

These mammals can be spotted in the lowland of Hokkaido, however, in the main island of Japan, they can be found only in the high land of the Japan Alps.

The existence of wild animals is in relation to the availability of food, therefore areas rich in foods are the spots where one is most likely to encounter them.

Either way, climbing the Japan Alps begins at the base of the mountains, therefore, it is important to look for them in the more favored areas to spot them in nature. 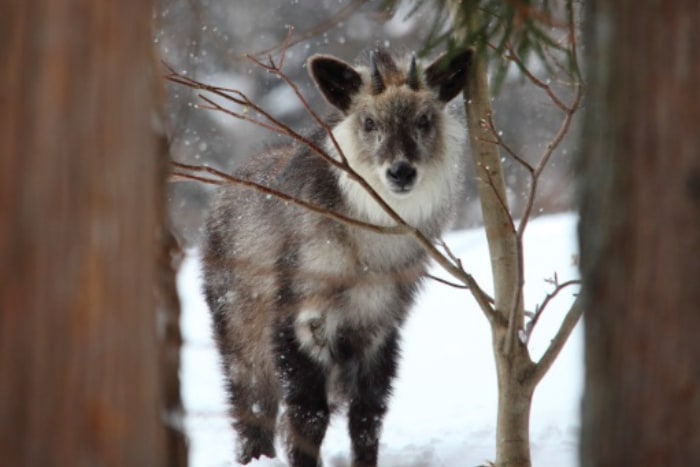 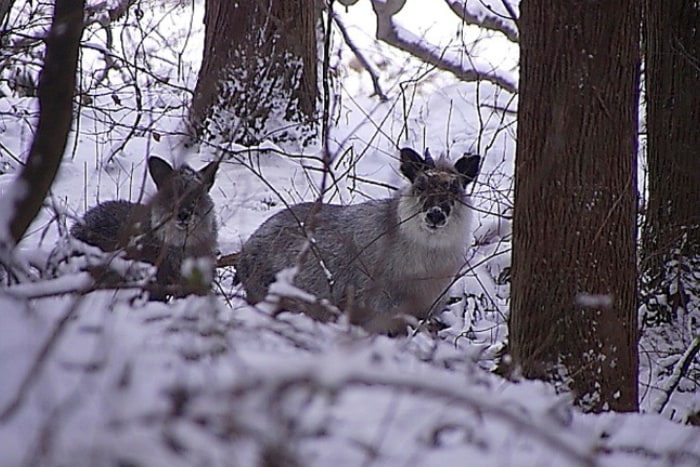 They used to be animals, living only in Alpine areas, however, due to the increase in the numbers of inhabitants, they can be seen even at the base of mountains nowadays.  They eat plants and live solo except for when a parent is with children, and each has its own territory.  They are also known as AO in some areas and can be seen on the rocky mountains, standing still for hours.  The difference between a deer and a serow is their body coloring.  A deer is brownish in color, whereas a serow is white to black and its color varies.  A deer defecates while walking around so its feces scatter.  The serow defecates at the spot where they ruminate.

Observing area of the Japanese serow 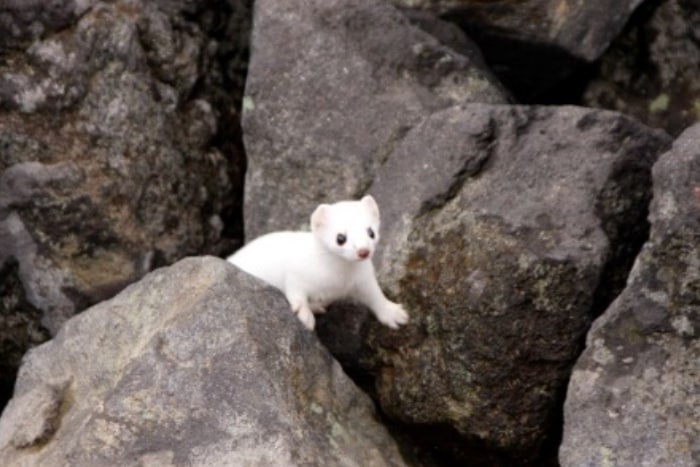 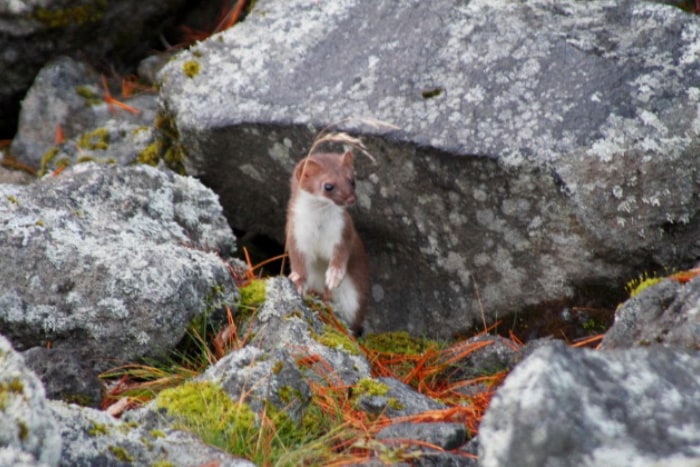 This animal is categorized as a weasel, living above 1,200 m in altitude, from the Sub Alpine Belt to the Alpine Belt. Their faces are cute, however, they are carnivorous and so fierce that they even prey on wild rabbits. They are very curious animals; therefore, you might be able to spot them in rocky areas while hiking. Their hair molts and its color changes from brown to pure white in autumn. The tip of their tails does not molt and remains black. They prey on rodents in rocky areas. Their body has evolved to thin and long to chase prey through tiny spaces among rocks. They are quick and fast animals, however, they peak their heads out occasionally at hikers feet on the trails. 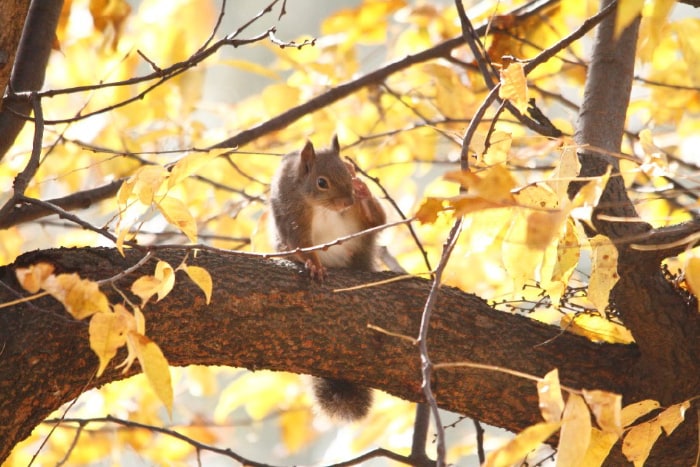 The Sciurus Lis, Japanese Squirrel, is about 22 cm in length and about the size of one’s palm. They live from the lowland to the sub alpine area, however, they are very cautious and might run away quickly even though hikers may spot them. They eat mainly things such as walnuts, however, surprisingly they eat odd foods such as the eggs of wild birds, mushrooms, pine nuts and insects. Their eating habits are closer to an omnivore. In winter, their hair molts and becomes more whiteish. Their territory is near 10 hectare and the territories of each male squirrel do not overlap. They breed twice a year and make a few nests in a ball shape above the trees and rest in them.

Observing area of the Japanese squirrel 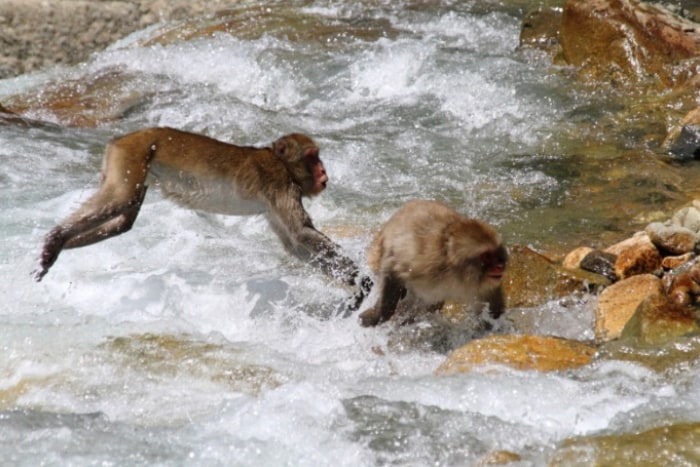 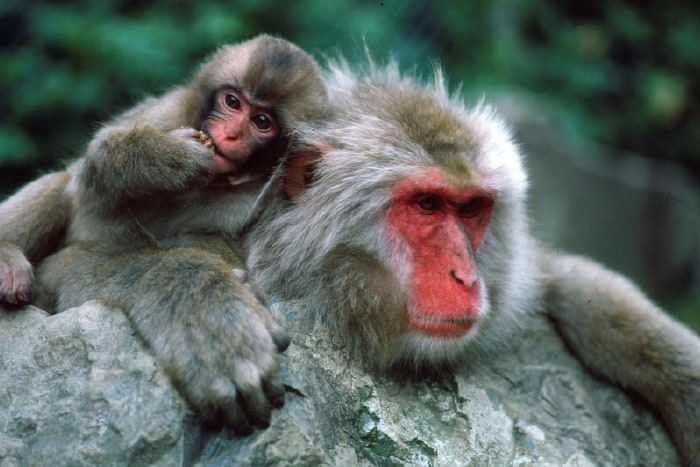 40 groups and a total 2,000 Japanese macaques live at the base of the North Japan Alps. They migrate as a group and some groups climb up to 3,000 m in altitude in summer. They have however been reported to prey on Ptamigan recently. At the base of the mountains, some ruin fields and have been treated as vermin in those areas. They are omnivores and eat nuts and plants. They migrate within a territory of 1-80 kms. They maintain a dominance hierarchy and form a maternal group with a male leader. Some young males travel alone. They live in the northernmost area among macaques, therefore, they are referred to as the Northern Monkey.

Observing area of the Japanese macaque 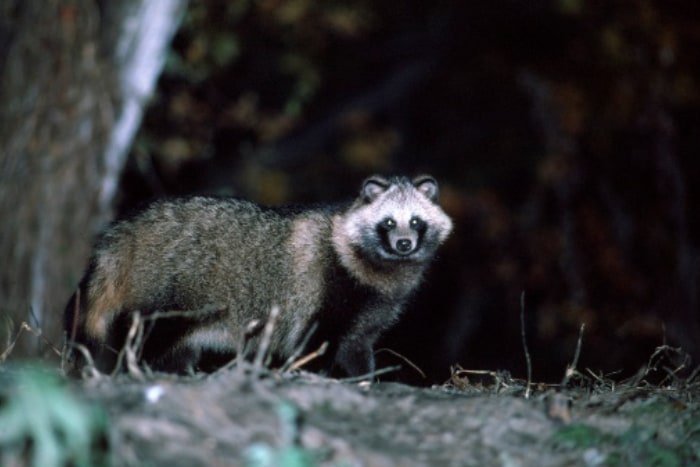 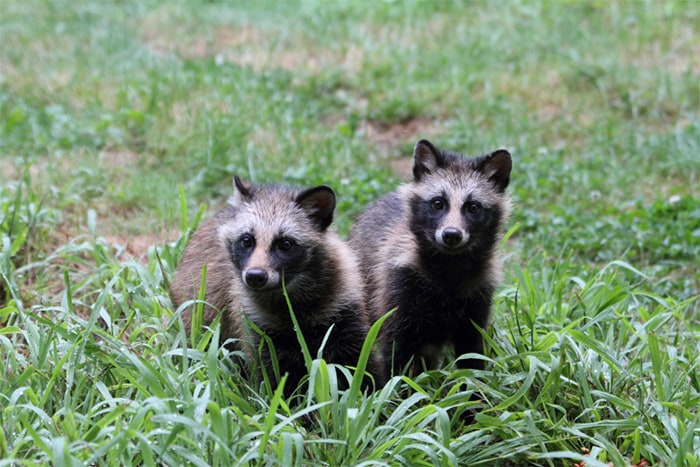 In Japanese characters, this animal is written as a beast in the village and they live at the base of mountains. However, some migrate in the Sub Alpine Belt, up to 2,000 m in altitude. They are omnivorous and smaller than the Shiba breed but they are more fluffy. They are nocturnal; therefore, it is rare to encounter them in the day time. Since they do not hibernate, there might be a chance to see them even in winter.
When they are shocked, they fall into a so-called racoon sleep or “Tanuki neiri” in Japanese. Tanuki is Japanese for racoon dog. Such behaviors may have induced the people of years ago to say that racoon dogs bewitch human beings. 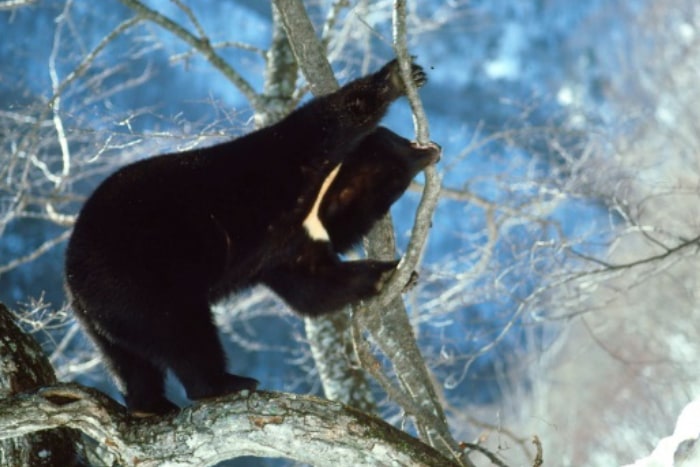 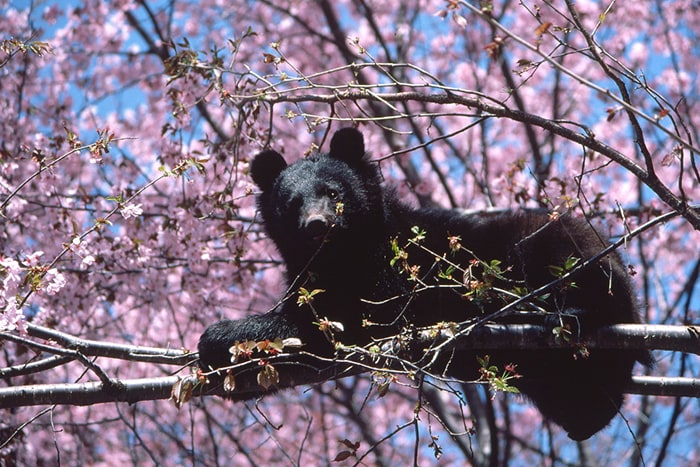 The biggest animal on the main island, the male bear weighs 120 kg. They are afraid of people so even though you may encounter them on trails, bears will avoid people on purpose. The usage of bear bells or radios to alert them to your presence on trails is one way to avoid a surprise run in with them. Basically they eat nuts and plants. It is useless to pretend to be dead if you see them on trails. You need to step back slowly to escape the situation. 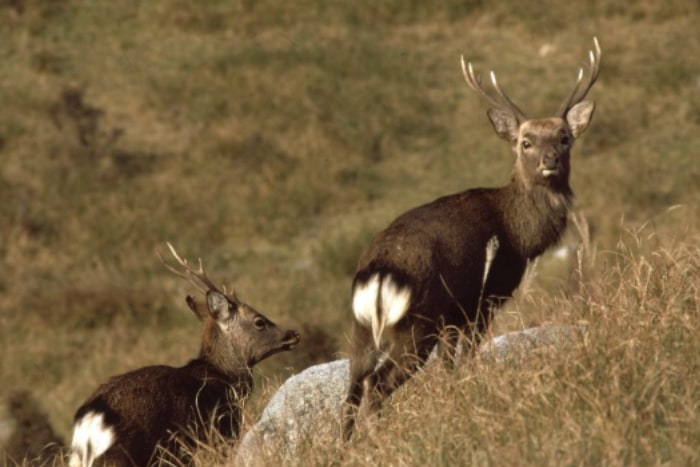 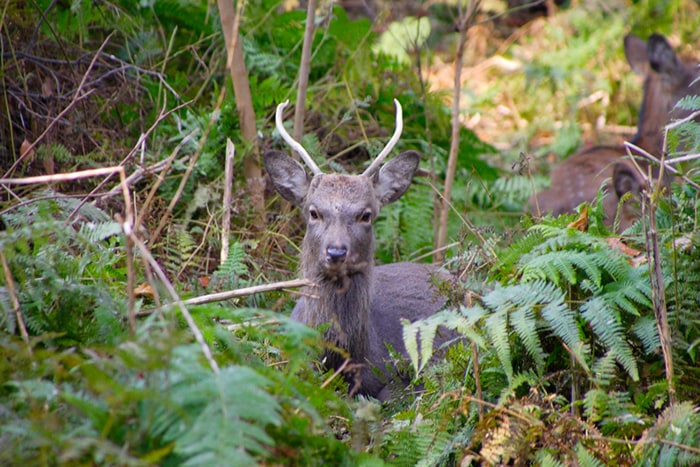 They hide in the forests of the Japan Alps in the day and come out to grass fields at night. In the South Japan Alps, when June approaches, they migrate to the alpine area. Their purpose is to forage alpine plants and great numbers in feeding damages have been reported. This has been recognized even in the mountains of the North Japan Alps so it must be stopped. When autumn comes, the love season for them begins. You might hear their rutting calls in the mountains. Female deers form maternal groups with their children. 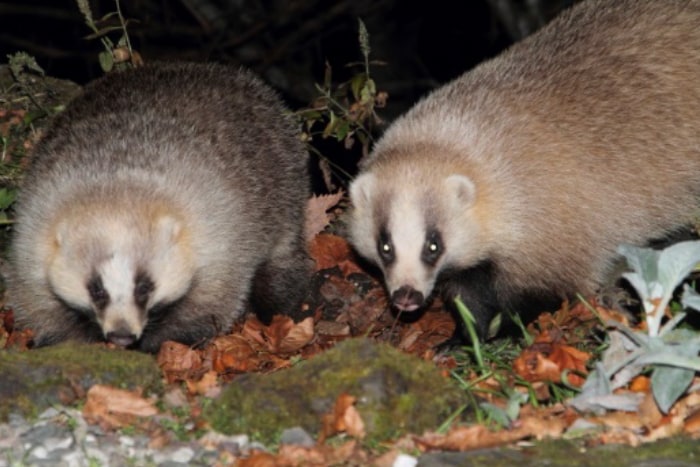 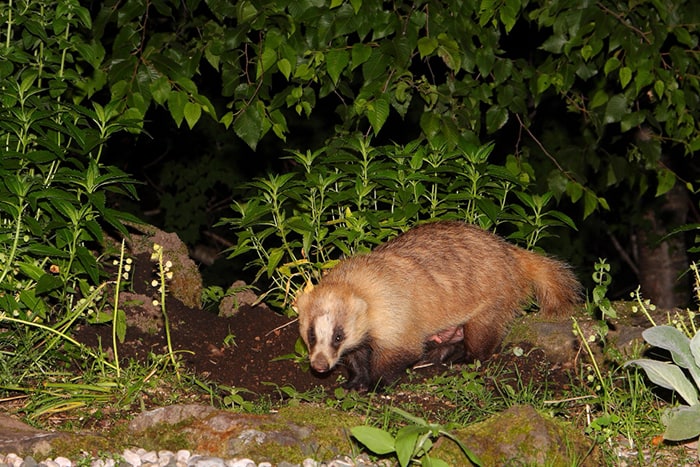 They might be mistaken for raccoons but they are in the weasel group and have been called badgers from ancient times. They have powerful nails and are very good at digging holes. They are able to dig out earthworms from the ground using their nails. In November, in certain areas, they hibernate and they store lots of fatty tissues in their bodies. In a meal called, “Tanuki soup” the meat in the soup is badgers’ meat according to hunters in the villages. 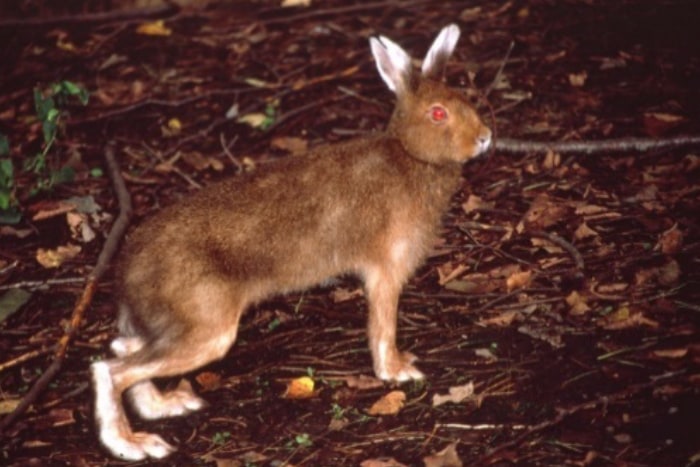 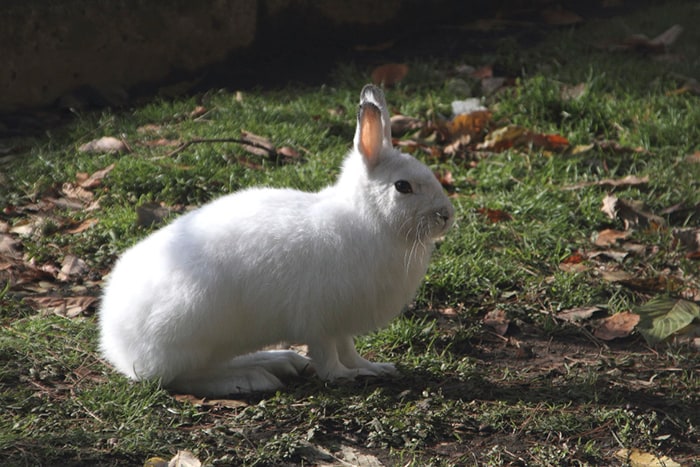 In winter, their footprints are seen as dots on the white snow, however, it is a rare occasion to actually run into them. They are only active at night and they always run around to avoid the eyes of predators. In daytime, they tend to stay still under bushes so they sometimes suddenly rush out from bushes and surprise hikers when they come very close to hares. In certain areas in winter, the brown hair of some hares molts into white hair. Many of them live up to the Sub Alpine Belt, however, they are very cautious creatures due to the large numbers of predators. 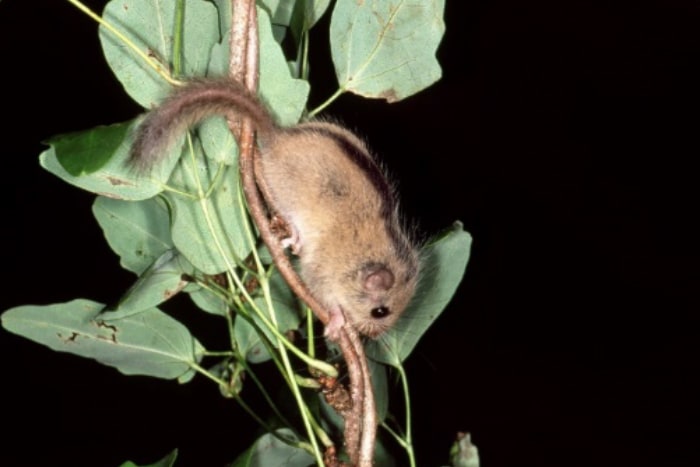 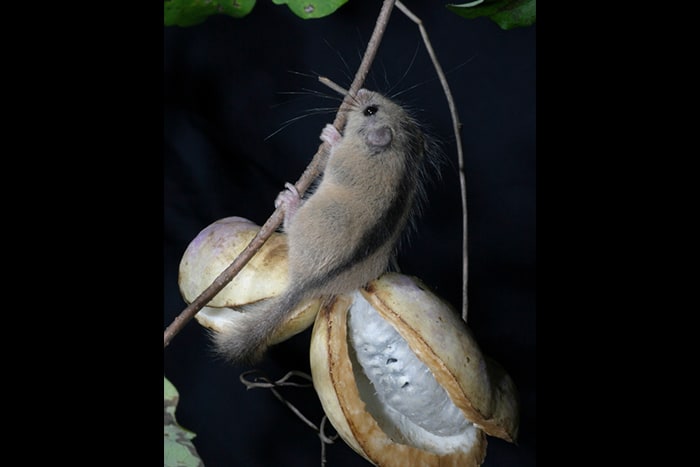 They look like mice, however, they belong to the dormouse group and they are 1 genus, 1 species. They have big eyes and a black line of hairs on their back. They are also called Kinezumi, and sometimes are found to hibernate as they curl up in the snow. They sometimes hibernate in bedrooms in mountain huts. They are very quick and can move upside down along branches. They migrate from the lowland to the Sub Alpine Belt and are nocturnal, therefore, it may be hard to see them. Some live in mountain huts in Mt. Yatsu-gatake and they are very popular among hikers. 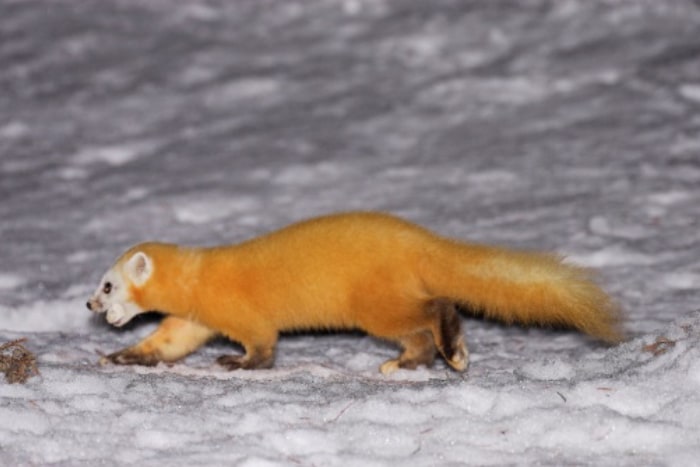 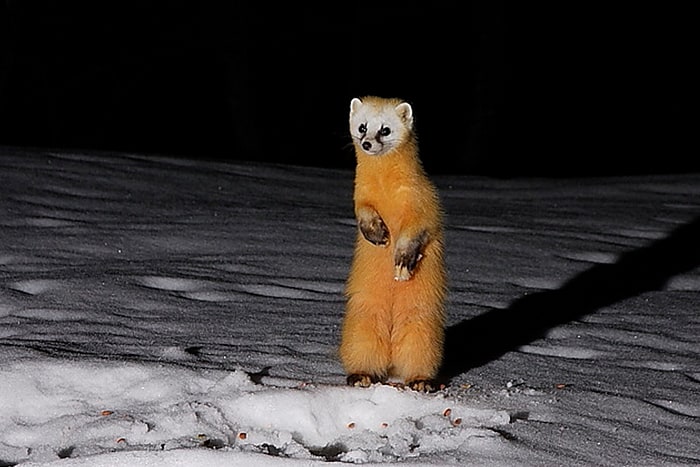 They are part weasel and do not hibernate. Since their hair molts to golden yellow, they used to be targeted during hunting. They are currently designated as an endangered species. In summer, their hair molts into a brown color. They are carnivorous, however, they also eat fruits and nuts. For that reason, their nails are strong and they are good at climbing trees. They migrate solo even in the daytime so you might be able to see them. Their faces are very pretty but they are in the weasels group and are very fierce. 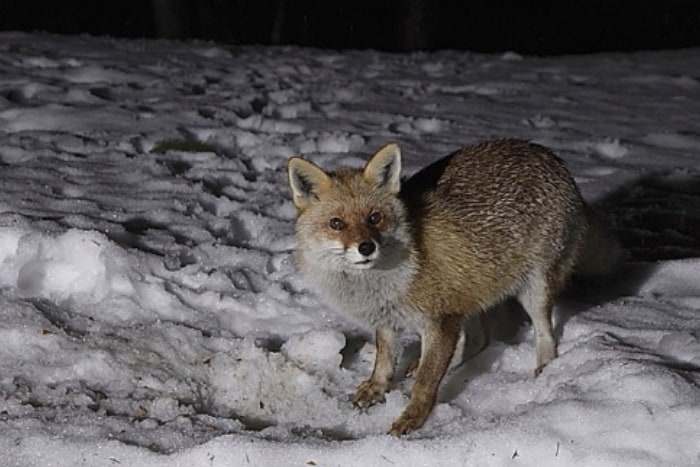 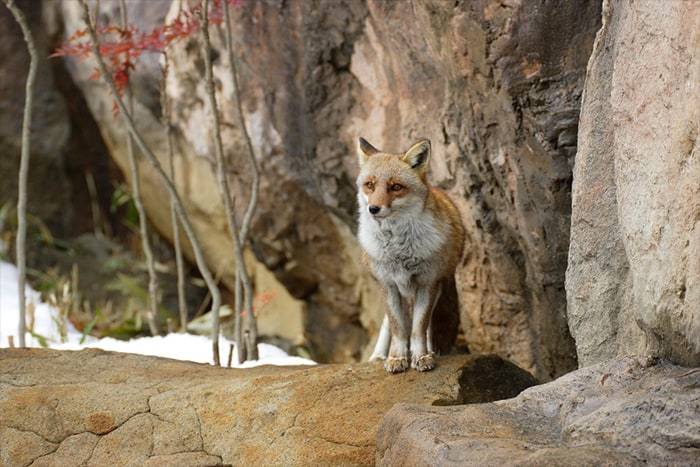 They are carnivorous and middle-size animals. They do not hibernate in winter. They sometimes use holes that badgers dig but they also create their own nest holes and raise babies. If you see a few holes in the mountains, they might belong to a fox.
They go out in the day during parenting; however, they are mainly nocturnal and more cautious compared with a raccoon. If footprints in the snow look like one foot, it might be a trail of foxes.

Back to the observing the Fauna of The Japan Alps